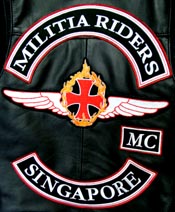 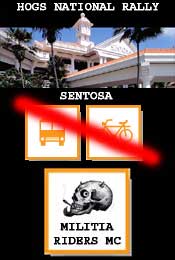 The 10th Anniversary of HOGS and National Day Rally 2005 was held on Sentosa island.

Sentosa had outlawed all bikes into the island except four-wheeled vehicles since the bridge was built. Kudos to HOGS for gettin' the go-ahead to ride in and party!

The opportunity to enter the garden island with our bikes was too tempting to resist. The unofficial count was 280++ bikes tryin' to ride in n sink the place. Adding to the fun and excitement were games like tug-of-war, slow bike race, bike wash (bikers not included) and BBQ! Biker MCs were also given space to do their stuff.

Met an "uncooperative" motorist (lorry driver) on the way to the bridge but the sound of 250++ harleys revving their pipes soon got the driver back into his vehicle...yeah!

After a couple of beers everythin' got hazy... drinkin' and more drinkin', a couple of knockouts, a ticket for unauthorised riding around the island (Keita you ass!) and rumors of a road-block waiting at the end of the bridge.

Haven't had that much crazy fun for a loooong time... Overall excellent!

Minimum Screen Resolution 1024x768
Copyright © www.militiarider.com . All Rights Are Ours.